$39.99
+6 Deal Score
4,344 Views
Amazon has Super Mario Party for Nintendo Switch on sale for 39.99 with free shipping. According to CCC the last time it was at this price was at the end of October. 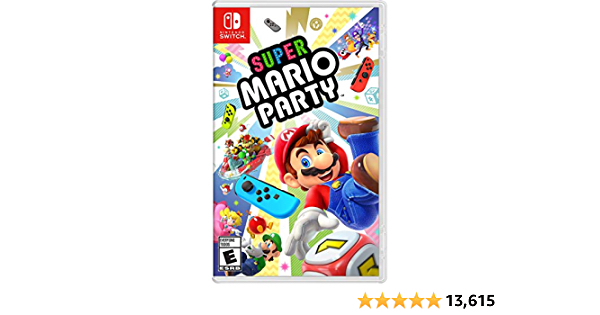 MoeFaux posted this deal. Say thanks!
Add Comment
Reply
in Tech & Electronics (4)
If you purchase something through a post on our site, Slickdeals may get a small share of the sale.

This comment has been rated as unhelpful by Slickdeals users
Joined Mar 2017
L4: Apprentice
376 Posts
112 Reputation
Our community has rated this post as helpful. If you agree, why not thank ?
01-18-2021 at 12:51 PM #2
Before the haters get here I'll say, having played pretty much every Mario Party as they released, this is a return to a better formula. They FINALLY got rid of the single car mechanic that had plagued the series since MP9 and implemented a lot of new changes to how you traverse the map so that it feels a little less like pure luck than ever. The minigames are also mostly on the good side and use the gimmicks of the joycons fairly well. And the maps are... alright. The one standout is the King Bob-omb map and all the rest are just serviceable.

That being said, there are significant flaws with the game. The biggest being the small number of maps. With only 4 total maps, you will want something new after playing each a few times. There's a duos mode that uses each map in different ways but you can only play that mode in 2v2. If we could play that mode in free-for-all then it might have lessened the sting of not having enough maps.

And the next biggest problem is the inability to play a board online. Online play is relegated to just playing a small collection of minigames against other players. I understand that they didn't allow us to play boards online because if any player has connection issues, then the entire play-session would end, but I wish they had worked out some solution to this other than not letting us do it at all.

All in all, Super Mario Party takes a lot of steps in the right direction, but then gets held back from being great by shooting itself in the foot with strange decisions. It's definitely better than the last 4 games in the mainline series but it's also hard to overlook its problems.

It's tough to recommend the game at this price because it all depends on how into the series are the people you'll be playing with. If they don't mind the lack of maps and just care about the gameplay, then it'll definitely be worth the money. But if you know they will have a problem with the quantity of maps then I'd suggest waiting to pick it up for less.

How to Get 2016's Ratchet & Clank Free on PlayStation
Copy Code & Open Site More Deals from
Did this coupon
work for you?
Copy
Link Copied to Clipboard