Slickdeals Forums Deal Talk National Geographic Kids Why?: Over 1,111 Answers to Everything (Hardcover) $7.50
Advanced Search
Sorry, this deal has expired. Get notified of deals like this in the future. Add Deal Alert for this Item
Frontpage Deal

National Geographic Kids Why?: Over 1,111 Answers to Everything (Hardcover) EXPIRED

Thanks to community member USMCR for finding this deal. 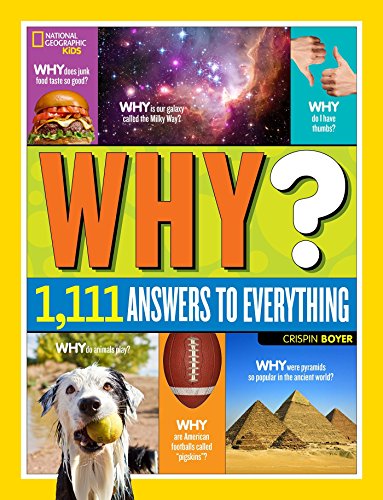 USMCR posted this deal. Say thanks!

Good for your kids.

Second to the lowest price per CCC's

Eligible Prime Members: Sign into Amazon App for the first time & make a purchase to get $20 off qualifying $40 order made via Amazon App
$0.00
21 51
Frontpage Deal

This comment has been rated as unhelpful by Slickdeals users
Joined Dec 2012
L6: Expert
1,569 Posts
188 Reputation
02-27-2021 at 07:57 AM #46
That's what most people try for a clever argument, but is it any different from asking what was there before there was anything? The idea of Oblivion is a scary thought and matter didn't just one day become matter right? Or did it?

2
Reply
This comment has been rated as unhelpful by Slickdeals users
Joined Sep 2012
Benevolent Misanthrope
653 Posts
151 Reputation
02-27-2021 at 03:08 PM #51
What's the "opposing theory" for human chromosome 2 [wikipedia.org]? I'm gonna keep harping on this until someone offers a non-evolutionary explanation for it. I'm genuinely curious.

Re: your other "arguments", yes tiny details about biology and little specifics about particular evolutionary hypotheses will be discarded or adjusted along the way. But the core remains not just unchanged, but even more massively supported with each passing year. DNA sequencing and cladistic re-analysis is a huge field right now and there is no way to make sense out of any of its discoveries except through the lens of evolution by natural selection.

0
Reply
This comment has been rated as unhelpful by Slickdeals users
Joined Sep 2012
Benevolent Misanthrope
653 Posts
151 Reputation
02-27-2021 at 03:37 PM #52
Note the "selection" part in the proper name of it: "Evolution by Natural Selection"

Natural selection is not random any more than an apple falling off of a tree and hitting the ground is random. There's no selective pressure involved in tossing a bunch of parts in your back yard.

1
Reply
This comment has been rated as unhelpful by Slickdeals users
Joined May 2008
Buy now, return later
1,824 Posts
344 Reputation
02-28-2021 at 11:19 PM #55
if evolution is a true THEORY then please show me where the transitory fossils are? Why do we care about animals/species going extinct... shouldn't they just 'evolve' into something else?
Why so many different species of birds.. shouldn't they all be about the same if they came from the same sludge? In fact, if we 'evolved' then why isn't everything about the same as it all had approximately the same amount of time to evolve...?

One need only to fully study the biology of a humming bird and a caterpillar/butterfly to prove we're not here by evolution.

I believe the Bible and God's Word, but if you don't, that's ok! However just don't accept the blatant lie of evolution... that my friend is definitely a joke.

Final rant, 'the big bang'. In our universe, you cannot create something from nothing. Period. That law blows the big bang theory out of existence.

Take care and be safe.

4
Reply
This comment has been rated as unhelpful by Slickdeals users
Joined Nov 2010
L5: Journeyman
769 Posts
79 Reputation
03-01-2021 at 06:00 AM #56
Agree with the above comment. Something cannot be created from nothing, and that clearly explains why intelligence cannot be created from deep and bigoted ignorance.

They will feel comfort greeting death as they believe in their hearts that they will likely meet their maker. I feel only sorrow at this, for I will greet my own with certainty that I lived the best life I could given the facts I saw along the way.
I'll take actual certainty over loud professions of certainty (intended to cover insecurities related to glaring omissions of knowledge) any day.

0
Reply
This comment has been rated as unhelpful by Slickdeals users
Joined Sep 2020
New User
18 Posts
10 Reputation
03-01-2021 at 03:12 PM #59
A scientific theory is not the same as other theories and you are only displaying that you do not understand what the term means.
Science is a fact with the understanding that new information will be found and will influence the THEORY of whatever you are discussing.
Religion, however, does not change with new information, even when it does not interfere with the core belief of the religion.
There is absolutely nothing in any religious book that says that a higher power didn't create evolution, yet evolution is made a target of religious venom constantly.
If a higher power created all things, that higher power created mechanisms to make the interactions of all things work within their design.
Gravity to keep us on the ground, an ozone to protect us from cosmic radiation, and, perhaps (if you chose to believe in said higher power) evolution to keep the creations working within the changing environments.
If you would like to say that your higher power is incapable of creating evolution, that's between you and your higher power.

What was befor the big bang
https://www.livescience.com/65254...g-big.html

Why These Giant Outdoor Games Will Complete Your Summer

Amazon Sidewalk is Using Your Wi-Fi to Build Smart Neighborhoods
Copy Code & Open Site More Deals from
Did this coupon
work for you?
Copy
Link Copied to Clipboard