Thanks to community member truckinusa for finding this deal.

Note: Must be logged into your Costco account w/ an active Costco Membership to purchase. Availability for store pickup may vary by location. 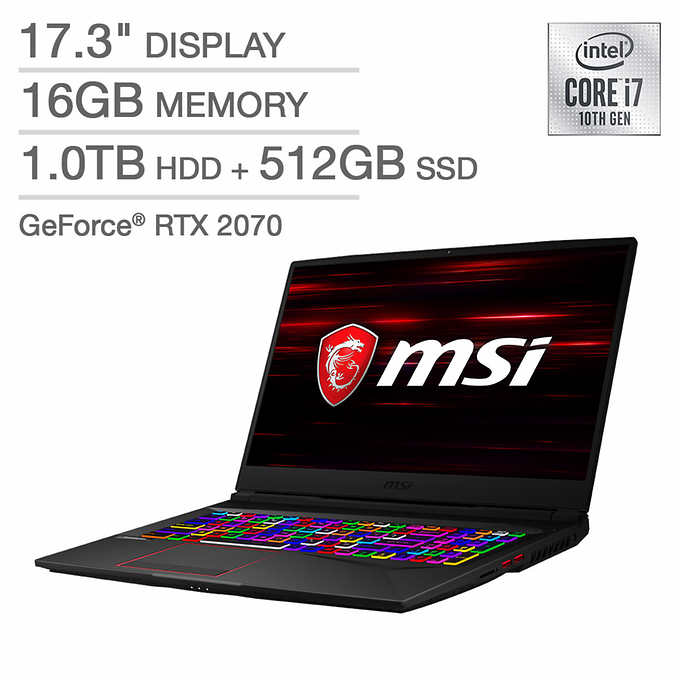 truckinusa posted this deal. Say thanks!

1. The fact that this is a Costco-sold laptop right away adds value with the 90 day returns + 2 year warranty.
2. 17.3" size ensures there is number pad
3. If you need one in the next couple of weeks, it's probably going to be a tight squeeze to get a 3060. IIRC, even some of the other best deals probably aren't shipping for 5 weeks or so.

Add Comment
Reply
in Laptops (5) Get Costco Wholesale Coupons
If you purchase something through a post on our site, Slickdeals may get a small share of the sale.

Assuming you signed up for the 5X Chase Freedom Flex categories this quarter, you will get 5X points for your purchase on Costco.com. That's worth enough points to get $60 ($1200 times 5%) cash back. Subsequently, if you transfer these points earned to Chase Sapphire Reserve it becomes worth 50% more (i.e., $60 times 1.5 = $90) when claimed as reimbursement for travel or groceries on the the Reserve card. If you have the Chase Sapphire Preferred rather than Reserve, its worth 25% more or $74 ($60 times 1.25).
https://www.creditcards.com/credi...ategories/

VI: MSI Laptop hierarchy (tells you the build-quality of the systems in their line up)

VII: Guide to increasing your laptop's performance by 10% by undervolting and overclocking

I'll say it again. You can undervolt the processor a good amount: I boosted my 6 core performance 29%, and it runs cooler. You can basically make it as good as a Ryzen (or better) with no risk to hardware. You have total freedom to manipulate power, temperature, and noise to your liking. For instance it runs just as fast at 35W as it did at 45W stock. If I max out the fans and CPU I can run at ~68W and 91C and 4.3MHz on all cores forever.

Undervolting is locked out of most 10th gen CPUs, but MSI allows it. You need to enable it in the bios, and then use Throttlestop. Ryzen processors can't be undervolted.

I bought the 2060 model recently and have no complaints. Improved GPU ~12% and CPU ~29% by undervolting and overclocking. Cooling is adequate with both maxed out. Great display and keyboard. It's nice to have a 2.5" drive installed and you can also add another m.2 drive.

03-07-2021 at 12:42 AM #11
Bought this to upgrade from the Overpowered laptop deal from Walmart a few years back to get better frames for COD Warzone. Getting around 100FPS. Still can't push 144 unfortunately.

After that you will want to undervolt too. I'll post a writeup on the TechPowerUp forum soon... probably this morning.

And you definitely want to undervolt your CPU. I think MSI allows this on all it's laptops if you get into the advanced bios menu.

The Raider may have a better screen (brightness, color gamut, response) depending on which model you have. It also has space for two m.2 drives as well as a 2.5" drive.

I personally wouldn't go through the hassle of selling something unless the upgrade was more substantial. In this case you'd have to really want a bigger display I think.