Thanks to community member SDRacerR1 for finding this deal. 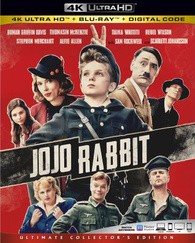 SDRacerR1 posted this deal. Say thanks!

Description: It is the latter part of World War II, and all Jojo Betzler (Roman Griffin Davis) wants is to become a Nazi. He turns to his 10-year-old imagination and begins to befriend a wackier version of Nazi Germany's ruler, Adolf Hitler. One day, he finds out that his mother, Rosie (Scarlett Johansson), is housing a Jewish girl named Elsa (Thomasin McKenzie). Despite going directly against his young beliefs, he has no choice but to keep quiet for his and his family's safety. Soon, he and his imaginary friend begin to see the world differently. Written and directed by Taika Waititi.~Jinko Labitag

Honestly this was one of my favorite, if not my very favorite, movies to come out in the last few years. I absolutely love it.
Please, do humanity a favor and shut up.

This movie was amazing. I wouldn't pay $14 for it but I can totally see why people would. The shoelace scene was proof of the quality of this film
I feel like I never once saw a sale for this movie! Finally! And in 4k! Thanks OP, rare to see someone beat Persian to the deals.

I bought the 4K digital for $9.99 last April and watched it a couple times already so I've gotten my money's worth. Though I see it's now $19.99 for 4K digital, so this is a great deal.

This comment has been rated as unhelpful by Slickdeals users
Joined Aug 2012
L2: Beginner
99 Posts
78 Reputation
07-20-2021 at 06:44 AM #11
Same. Definitely nothing around Black Friday. Jumped on this one quick as I have been waiting.