Widely regarded as one of the funniest and most tragic books ever written, Don Quixote chronicles the adventures of the self-created knight-errant Don Quixote of La Mancha and his faithful squire, Sancho Panza, as they travel through sixteenth-century Spain. You haven't experienced Don Quixote in English until you've read this masterful translation.

This P.S. edition features an extra 16 pages of insights into the book, including author interviews, recommended reading, and more. 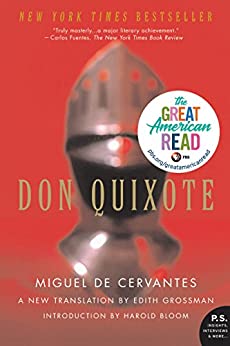 phoinix posted this deal. Say thanks!
Add Comment
Reply
Created 07-27-2021 at 02:45 AM by phoinix
in eBooks (2)
If you purchase something through a post on our site, Slickdeals may get a small share of the sale.
Deal
Score +9
2,621 Views
$1.99
See Deal
About the OP
Send Message
Expert Pro
Joined Dec 2010 L5: Journeyman
4,341 Reputation Points
329 Deals Posted
614 Votes Submitted
527 Comments Posted
Don't have Amazon Prime? Students can get a free 6-Month Amazon Prime trial with free 2-day shipping, unlimited video streaming & more. If you're not a student, there's also a free 1-Month Amazon Prime trial available.

Note: I have no affiliation with either entity mentioned above. I'm just a big fan of both.

0
Reply
This comment has been rated as unhelpful by Slickdeals users
Joined Oct 2015
不浪费
18 Posts
10 Reputation
07-27-2021 at 04:52 PM #6
Author: Edith Grossman? ok, I get it, a translator can be considered an author if there is considerable work in adaptation and interpretation, but c'mon, poor Miguel de Cervantes Saavedra is about to jump out of his tomb to give a thumbs down to this post, not even a mention? :-)

07-29-2021 at 06:22 AM #7
As a one-time volunteer for Standard Ebooks, I think we should clarify the difference between the two versions. SE is bound by US copyright laws, and so they only release books that are already out in the Public Domain. By its nature, that means the editions available are going to be based on 19th or early 20th century translations.

In this instance, SE's version of Don Quixote is using John Ormsby's [wikipedia.org] translation. That's not a bad thing necessarily--the wiki entry seems to indicate his was fairly accurate. But some readers may find it's not quite a "modern" translation, as the Edith Grossman translation might be.

So if you're considering getting it, I recommend grabbing the SE edition first and skimming a few pages to see how it "reads" to you. If it's good enough, great! It's free. If it feels a little archaic, however, but you feel like you still want the story, maybe consider plopping the $2 for the Edith Grossman version.

What Are the Best Reads in Reese's Book Club? Just ask Google Assistant!

HBO is No Longer Available on Amazon Prime
Copy Code & Open Site More Deals from
Did this coupon
work for you?
Copy
Link Copied to Clipboard