Tooturntt3 | Staff
+47 Deal Score
31,044 Views
YmooDirect via Amazon has 1Mii Bluetooth Audio Receiver Bluetooth 5.0 Adapter on sale for $12.47 when you apply promo code 48QMGMTS during final checkout. Shipping is free with Prime or on orders $25+.

Thanks Slickdeals Staff Member Tooturntt3 for sharing this deal 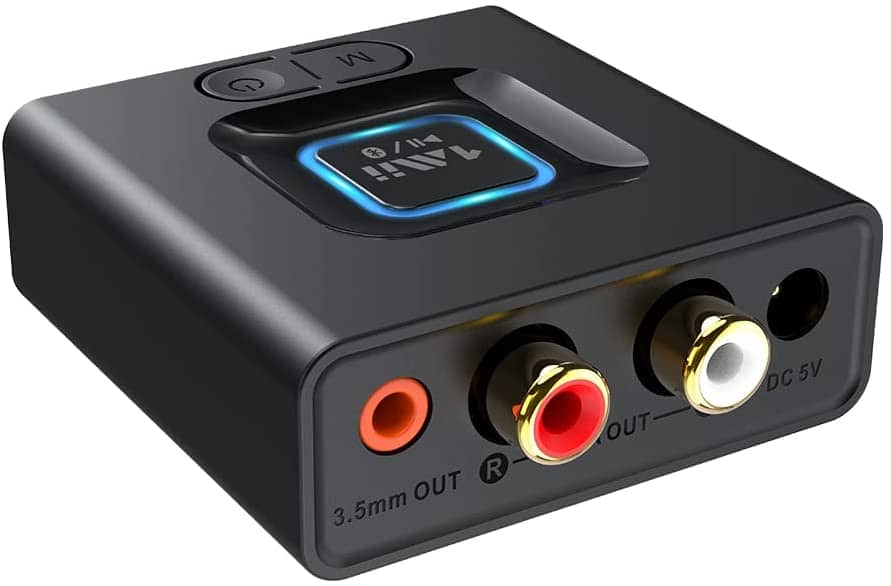 Written by Edited November 17, 2021 at 08:38 PM by
YmooDirect via Amazon [amazon.com] has 1Mii Bluetooth Audio Receiver 12hrs Playtime, Bluetooth 5.0 Adapter for Home Stereo Music Streaming System, Low Latency, Bass Mode on sale for $12.47 w/ promo code 48QMGMTS at check out. Shipping is free with Prime or if you spend $25 or more.

I bought it in April. It's not AptX-LL.
As far as I know, AptX-LL is the only low latency CODEC.
Anyone claiming their device is low latency without having AptX-LL is lying.

The Amazon page says it has a Bluetooth 5.0 chip to ensure Hi Fidelity.
Bluetooth chips are about connectivity, pairing/unpairing and range not Hi Fidelity.
AptX-HD, LDAC and DAC's have to do with Hi Fidelity.

Esinkin makes one identical to the Logitech one. Breakerbroke32 on Youtube took apart a Logitech and an Esinkin and they were identical. The Logitech sells for high $20's. The Esinkin sells for low $20's. I got this 1Mii for $12 which looks exactly like the other two. The other two don't have the bass boost and EQ that this one has.

Just today I saw a lot of no-name ones on eBay that look like these. I didn't notice if they have bass boost or EQ.

The speakers you use have more to do with the audio quality than the BT dongle/device.
I know someone who has a Sony STR-100 or some model like that, that has BT4.2, I think, and it sounds OK. A Sony boombox a friend has sounds good playing via BT from a laptop playing Youtube music videos. I have 4x4x2" speakers I got at Home Depot that were great for playing spooky sounds in front of my house for Halloween. I've had an 8" long speaker that sounded OK and one that looks like a car oil filter that sounds good.

I got this to add BT to a circa 1980's non-BT stereo reciever. I think BT5 and BT4 are fine for music. AptX-HD is better for music.

I noticed my BT5 laptop reaching a speaker further away than my BT4 laptop on Halloween.

I think AptX-LL is necessary to watch movies while sending sound to BT speakers or to a BT dongle on a stereo receiver to reduce or eliminate lip lag.

I'm pairing Sony SSCS5 speakers with my Onkyo and this BT dongle. There's much written about these speakers and on Youtube that they're sort of audiophile and can be had for $72 when on sale. I'll be playing music through it. I wish it had AptX-LL so I could send movie audio from my laptop to my receiver. I'll give it a try but I'm on the lookout for one with AptX-LL.

Note that if you have any from of AptX, you have to have it on both your transmitting and your receiving device.

The Darko Audio is well versed in the field and has been big in stereo magazines and stereo websites that are well regarded in the industry. Breakerbroke32 has much knowledge and many reviews on BT devices and the Cheap Audio Man is all about quality and bang for your buck. They're all on Youtube.

$12 is a steel for this item. I think it usually sells for twice that or more. Usually, $14 and less gets you a dongle that is USB only or it's USB for power and has a 3.5mm jack for line level input. Some of those are OK and some are very low quality.

Breakerbroke reviews the Esinkin and a Harmon Kardon BT receiver. He notes that the Harmon Kardon is a bit warmer but it retails for over $60. So, your BT device can effect the quality of the sound but speakers are the biggest factor in your sound quality, the second biggest factor for computer or compressed audio would be a DAC. The third would be your amp and having tone controls, bass and treble knobs allows you to boost or flatten your sound as you like to make up for anything any part of the sound quality equation is lacking. The CODEC such as AptX has to do with the compression, packing and unpacking of the data and kbps.
LDAC - 990kbps
AptX-HD - 576kbps
AAC - 256kbps
SBC - 325kbps

I thought I was responding to your question on sound quality. I see you asked what has AptX-LL and does the device automatically use it. Yes, it will use the codec to transmit and you have to have AptX-LL on the receiving device too. Boltune among others has a TX.RX device. That is it can be switched between being a transmitter and a receiver. It's about 3.5"x 3.5"x1". You can find something on eBay and Amazon for between $15 and $30.

Breakerbroke32 on Youtube does a roundup of MANY BT receivers and transmitters and some with DAC. Many sell between $20 and $30.

The Ifo Blue Zen II for @ $120 is a great BT receiver. There's the first Zen and a version II. The later costs $20 or so more than the former. I forget what it has for AptX.

The Audioengine sells for @ $180 and has long been regarded as the best for that price.

The Zen is now regarded as rivaling the Audioengine especially due to the price difference.

It's all a mix of BT (get the latest BT5), various versions of AptX, if it's a transmitter or receiver or both, if it's a DAC or not, if it is an amp or not, if it accepts a headphone jack and what it has for inputs. Well, that's the various things they can add to a basic BT dongle to make it do whatever you would want it to do.

I haven't noticed lip lag on Youtube music videos played via BT to a Sony boombox.
I have the non-AptX-LL one in this thread for music.
I will be getting one with AptX-LL for movies.
I'm going to get a BT amp with AptX-LL for some old passive speakers to play to them from my cellphone and laptop.
I'll be adding the Schitt DAC to my Onkyo sometime.
I'll be adding AptX-HD to my Onkyo someday.

Good luck and have fun!

11-17-2021 at 02:45 PM #6
Have two of these for over a year with no issues. Good quality connection and decent sound card. RCA connection is much more stable than aux

0
Reply
This comment has been rated as unhelpful by Slickdeals users
Joined Dec 2007
L6: Expert
1,596 Posts
176 Reputation
11-17-2021 at 09:23 PM #12
They basically turn standard speakers into Bluetooth speakers… the real question is can your existing setup connect to and make use of Bluetooth speakers as wireless satellites?

1
Reply
This comment has been rated as unhelpful by Slickdeals users
Joined Aug 2015
L5: Journeyman
823 Posts
178 Reputation
11-17-2021 at 09:46 PM #14
Pretty sure this thing won't actually "drive" any speakers. It just passes a line-level signal to some kind of amplifier (like a regular stereo receiver or a pair of powered speakers with some kind of built-in amp.

0
Reply
This comment has been rated as unhelpful by Slickdeals users
Joined Jul 2004
L9: Master
4,744 Posts
303 Reputation
Our community has rated this post as helpful. If you agree, why not thank ?
11-17-2021 at 09:46 PM #15
I bought it in April. It's not AptX-LL.
As far as I know, AptX-LL is the only low latency CODEC.
Anyone claiming their device is low latency without having AptX-LL is lying.

The Amazon page says it has a Bluetooth 5.0 chip to ensure Hi Fidelity.
Bluetooth chips are about connectivity, pairing/unpairing and range not Hi Fidelity.
AptX-HD, LDAC and DAC's have to do with Hi Fidelity.