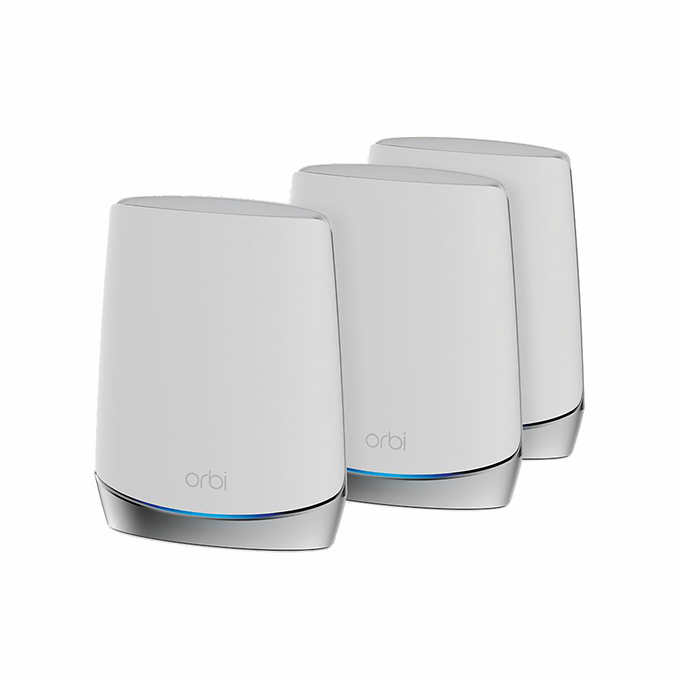 NeatGuitarIsDumbPhuc posted this deal. Say thanks!
Add Comment
Reply
in Routers (4) Get Costco Wholesale Coupons
If you purchase something through a post on our site, Slickdeals may get a small share of the sale.

This comment has been rated as unhelpful by Slickdeals users
Joined Jul 2008
L7: Teacher
2,050 Posts
341 Reputation
Our community has rated this post as helpful. If you agree, why not thank ?
01-17-2022 at 05:01 AM #2
This system started crashing on me days into using it. It would randomly drop the connection to the internet and sometimes go as long as 15 min before picking it up again. . You may luck out and not experience this but I suspect the product was not fully baked. I ended up with the Eero pro 6 and have had zero issues from day one. If you are doubting me go to the net gear forums.

1
Reply
This comment has been rated as unhelpful by Slickdeals users
Joined Sep 2014
DealSlicker
418 Posts
52 Reputation
Our community has rated this post as helpful. If you agree, why not thank ?
01-17-2022 at 05:28 AM #4
These things suck, honestly, I'm still meaning to return mine, the satellite's have know hardware issues - with drops outs and latency spikes, save yourself a headache and before people chime in on their great orbi experience google some of the hardware issues.

My expectation was for these to work well out of the box, esp with wired back haul

1
Reply
This comment has been rated as unhelpful by Slickdeals users
Joined Nov 2007
L5: Journeyman
645 Posts
215 Reputation
Our community has rated this post as helpful. If you agree, why not thank ?
01-17-2022 at 06:01 AM #5
Let me start by saying the issues noted in previous comments have been resolved, but that doesn't make me happy with Netgear.

Netgear has treated the Orbi community like dog crap. For a few months the system had been plagued by awful connectivity issues resulting in dropped connections and disconnecting video and audio conferencing. The company stayed silent, didn't offer any consolation or immediate resolution, and trickled out some minor firmware update attempts that did nothing. Last week a firmware (4.6.7.5) was shared that finally resolves the craziness after updating the devices and power cycling them (factory resetting is recommended if you setup customized configurations like port forwarding and static assignments), but they haven't rolled it out onto the auto-update system yet - you have to manually install it. I had downgraded to a previous firmware not plagued by issues and blocked updates to have the system stay usable for me until I installed this new update late last week. The system has performed very well and really is great on paper, but I friggen hate being treated like an asshole after spending over $1000 on the particular system I had ordered. I recommend anyone still dealing with the connectivity problems to turn to the community forum and download the new firmware - it has been rock solid for almost a week now and we do a lot of conference calls out of our home. If there was any support, empathy, or communication what-so-ever by Netgear while they were bungling through fixing their mistakes, I would've been much more positive about the system. Before the bugs were introduced, and now that they have finally been resolved, the system is handedly the most impressive consumer mesh system on the market. The hardware is surprisingly robust and, then the software isn't messed up, it works amazingly well. I plan on returning to the UniFi ecosystem next time I update my network equipment, but I don't plan on that upgrade anytime soon.

Technically this is a good buy and safe purchase: the bugs are now fixed if you do the update yourself and you can now disable automatic firmware updates, which I highly recommend you do, to prevent any further nightmares introduced by Netgear. You lucked out not having to suffer from the company's B.S.

1
Reply
Last edited by tchalljr January 17, 2022 at 06:25 AM.
This comment has been rated as unhelpful by Slickdeals users
Joined Sep 2012
L2: Beginner
216 Posts
37 Reputation
01-17-2022 at 11:05 AM #7
I'm on the last gen and have similar thoughts...sorry to cut down, but didn't want to mislead people by quoting portions of what you wrote. When I first got my Orbi (RBK50) it was a nightmare. It would work great for a few hours/days and then I'd run into major issues for days at a time. The community did a great job at finding workarounds, but no recognition from Netgear for weeks. They finally fixed the issues and shouted it from the rooftops, but the customer experience was lousy...

that being said, when the product works, it's excellent. I went on to buy another node for my house and it made things better as expected. I'm super tempted to grab this based on the (entire) quoted message above, but will wait to read a few more comments from people here.

0
Reply
This comment has been rated as unhelpful by Slickdeals users
Joined Sep 2014
DealSlicker
418 Posts
52 Reputation
01-17-2022 at 11:08 AM #8
Ya I manually updated to the newest firmware the night it was out, what you are saying is wrong, I'm still having satellite issues, these are hardware and radio problems and it's not just isolated to a few unhappy people

This comment has been rated as unhelpful by Slickdeals users
Joined Apr 2008
L6: Expert
1,455 Posts
1,492 Reputation
01-17-2022 at 11:26 AM #9
I know experiences vary, but I just want to put my 2 cents in. I replaced an older Orbi system with this for a 4500 sq ft house. The old one worked but dropped in certain spots sometimes. This one has complete coverage and I'm getting excellent speeds.

That being said, I think everyone can agree the very limited customer support (90 days) Netgear provides for what is a flagship series of routers is outrageous. If I did have a problem, I might feel differently about this product but so far I've been lucky.

Also this router system with Ethernet backhaul has delivered very consistent wifi for our house so far for 1 wk. Upgraded from Nighthawk system.

But my true dream is a ubiquiti

EDIT: 1/31/22 - It's been a couple weeks now. No gripes. All of my devices are connected and no disconnects. All my older devices with 2.4ghz worked fine with the single SSID for all channels. This is definitely way better than some of the negative reviews suggested.

0
Reply
This comment has been rated as unhelpful by Slickdeals users
Joined Nov 2007
L5: Journeyman
645 Posts
215 Reputation
01-17-2022 at 01:20 PM #14
It's not, though. The issues were introduced with version 4. Our network became unusable, just like everyone else. Before version 4, there were no significant issues consistently across the board. I downgraded to the last version 3 once the problems were identified and blocked updates with Pi-Hole. The craziness was immediately resolved and my network was fine, just as the downgrade had worked for others. Unfortunately, you needed to block firmware updates with a DNS intercept/middleman or the updates would push again. Now, I've finally upgraded to the new firmware, and after power cycling and hard resets across the board, my network is fine. I'm not sure how you'd come to the conclusion that a problem introduced with a firmware update had to be a hardware issue.

Furthermore just listen to your ramblings here downgrading to an older 3x version of the firmware and blocking updates.

Simple googling will inform anyone looking for rbs750 the problems with the radio, signal degradation over time and drop outs.

The horrible firmware and interface is just icing on the cake.

Unsure as to why you'd be trying to push this terrible product onto the community.

People should look at the xt8 or x68u, avoid this headache