Terry Pratchett's profoundly irreverent novels are consistent number one bestseller in England, where they have catapulted him into the highest echelons of parody next to Mark Twain, Kurt Vonnegut, Douglas Adams, and Carl Hiaasen.

In this Discworld installment, Death comes to Mort with an offer he can't refuse -- especially since being, well, dead isn't compulsory.As Death's apprentice, he'll have free board and lodging, use of the company horse, and he won't need time off for family funerals. The position is everything Mort thought he'd ever wanted, until he discovers that this perfect job can be a killer on his love life. 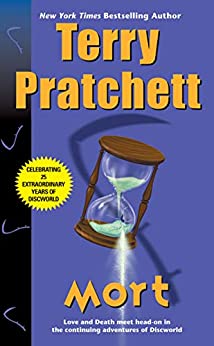 phoinix posted this deal. Say thanks!
Add Comment
Reply
in eBooks (2)
If you purchase something through a post on our site, Slickdeals may get a small share of the sale.
Deal
Score +7
4,629 Views
$1.99
See Deal
About the OP
Send Message
Expert Pro
Joined Dec 2010 L6: Expert
7,833 Reputation Points
1,028 Deals Posted
1,229 Votes Submitted
1,355 Comments Posted
Don't have Amazon Prime? Students can get a free 6-Month Amazon Prime trial with free 2-day shipping, unlimited video streaming & more. If you're not a student, there's also a free 1-Month Amazon Prime trial available.