Note, availability for in-store pickup may vary depending on location. 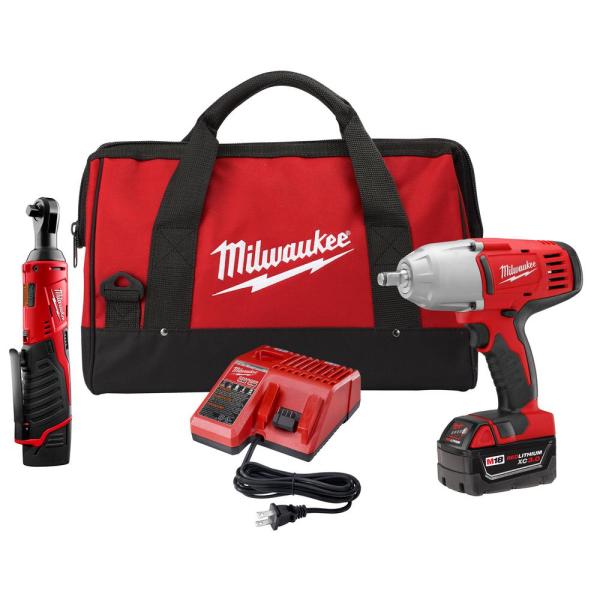 tamirtoad posted this deal. Say thanks!

Price is $199 for the kit. Don't forget that Home Depot accepts Paypal so that's 5% with a category cashback card. Note: These are not the fuel versions but still looks like a decent deal especially since the batteries are included.

Add Comment
Reply
in Tool Sets (4) Get Home Depot Coupons
If you purchase something through a post on our site, Slickdeals may get a small share of the sale.

Not saying this isn't a good deal. It is. But pointing out to the untrained eye that this isn't one of the fuel impact wrenches.
22 Helpful?
I bought the mid torque fuel and have loved it. I also bought the fuel ratchet when it was on sale earlier this year for 139 and find it too large. I would recommend the mid torque or high torque in 1/2" and a stubby m12 in 3/8. With those two you can complete just about any servicing to your car.
6 Helpful?
There's also a kit with the inflator + additional m12 battery (which is equivalent to $10 savings over buying the inflator kit separately)

I got a rigid kit last year, primarily for the impact, but thinking of selling and getting this instead...
6 Helpful?

This comment has been rated as unhelpful by Slickdeals users
Joined Feb 2014
L1: Learner
19 Posts
14 Reputation
Our community has rated this post as helpful. If you agree, why not thank ?
12-03-2019 at 01:35 PM #3
There's also a kit with the inflator + additional m12 battery (which is equivalent to $10 savings over buying the inflator kit separately)

I've used the Husky when replacing my garage spring, it was overhead where I really felt using a lighter tool helped me much as my muscles were not as cramped as they could have been otherwise. It might be a 5 minute job but I didn't know what I was doing plus the color was out so I installed the wrong spring first then having to replace it, so it was double the work so to speak. So using a tool repeatedly in an overhead situation is where a lighter tool excelled.