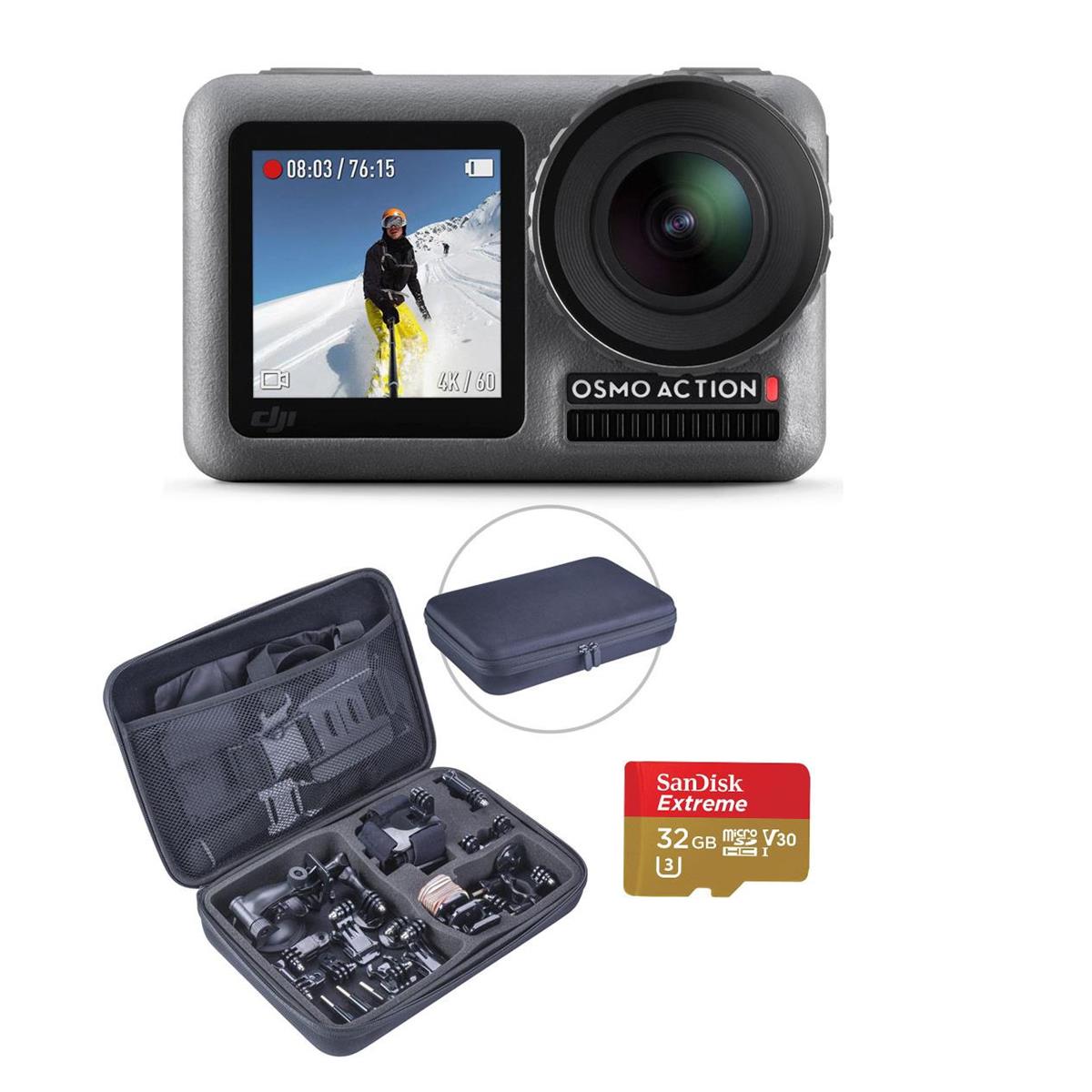 dumien posted this deal. Say thanks!

QA Edit: If the charging kit doesn't automatically add to cart, you can add it manually and it should still be free
https://www.adorama.com/djiosmoap3.html

QA Edit 2: The camera in all bundles is 'Temporarily On Backorder', so for those doing the Amex $25 back on $250 deal, you might want to double check that if the camera doesn't ship (and thus doesn't charge you for the camera itself) until after the May 31st end date for the Amex deal, whether or not Amex will honor the $25 back.

Add Comment
Reply
in Dash Cams & Action Cams (7)
If you purchase something through a post on our site, Slickdeals may get a small share of the sale.

When the Costco GoPro 8 deal came up, I did some pretty extensive research on Osmo Action VS GoPro 8 and eventually pulled the trigger on the Costco deal.

Here's what I found:

Similarities
- Both shoot 4k videos up to 60fps and 12MP still photos.
- Pretty much same feature sets from both - great image stabilization, super slow slo-mo videos, time-lapse videos, and voice control.
- Similar weight, size, and battery life
- Accessories. Since they share the same mount, you can use any GoPro mount accessories on Osmo.

Basically, as an action camera, you can take good photos and videos with extra fun features from either of them.

Now here's the fun part. Diferences
1. Screens
The most notable difference between the two cameras is the front-facing screen. Osmo action has a nice 1.4 inch front-facing display that could be very useful when you are recording yourself. Also, the rear screen on Osmo action is noticeably bigger than that of GP8.
Although GP8 does not have a built-in front-facing display that can show what's currently being filmed, they are going to offer an add-on display screen if you're willing to pay extra $160.. This add-on screen was announced a long time ago but it's still not available..

2. Field of view
In my opinion, this is one of the most important differences. Now, I mentioned earlier that both offer great image stabilization. However, the Osmo's stabilization comes at a huge cost. When the stabilization is on, the field of view gets very narrower. It's very noticeable compared to GP8. Even though GoPro 8 also does have some crop when the stabilization is on, it still offers very wide FoV and it can be very crucial depending on what you're shooting. If you need to shoot a stabilized wide action of your exciting activity, you just can't do that with Osmo.
If you turn off the image stabilization, you can get very wide FoV with Osmo but I don't think many people would want a shaky video from an action camera.
This review [youtu.be] shows the difference really well.

3. Aspect Ratio
When I mentioned earlier that both can shoot 4k videos up to 60fps, I really meant it.
Although GP8 delivers full 4k 60fps, Osmo only offers 60fps on 16:9 ratio video which loses top and bottom of the image compared to 4:3 ratio. Osmo can only shoot 4:3 with 30fps. This can be a dealbreaker if you need to shoot 4k 60ps on 4:3 aspect ratio.

4. Lens
One of the biggest complaints that people have on GP8 is the non-replaceable lens. Unlike GP8, Osmo action has a replaceable lens cover design. If you damage it, you can simply swap it with a new one. With GP8, you basically have to replace the camera itself which sucks big time.
That said, I've read a bunch of both short-term and long-term reviews of GP8, and I have yet to find anybody that actually broke the lens on GoPro. Most people use a tempered glass lens protector on GoPro's lens just like those screen protectors you put on your cell phone screen. I did see many reviews saying that the protector actually saved the camera. Their protector broke but their lens was fine. Of course, we wouldn't know if the lens would have actually survived from the damage when the lens protector was not on. The lens could actually be pretty strong enough to endure heavy usage. Either way, my conclusion was that although it sucks to not have a replaceable lens cover option, the lens protector would actually be enough. I haven't seen any complaints about the lens protector affecting image quality.
There's actually a third-party accessory [adorama.com] that allows you to put a 52mm UV filter on if you really want to protect the lens.

5. External mic option
Unfortunately, both cameras don't have a good internal mic. They just suck lol So those who want good audio, need to use an external mic.
Now, both cameras don't offer a 3.5mm audio jack. You need to get an adapter that allows you to input mic cable into the USB-C port of the camera.
The difference here is the price and design of the adapter.
GoPro's adapter is freaking $49 and it's HUGE compared to the one for Osmo. Also, there are various adapter options you can use on Osmo and the cheapest one [amazon.com] is only $19.99. For GoPro, there's only one offered by GoPro. There's just simply no alternative.

6. Usability
Many reviewers have stated that the UI of Osmo is simply better than GP8. It's faster, more responsive, and intuitive. One aspect of Osmo that stood out to me was the QuickSwitch (QS) button. It allows you to quickly switch custom settings by physically pressing the button on the camera. Although GoPro does have the preset feature as well, you can only control it via the touch screen. I think the physical button would come in really handy especially when you're not in a place to use the touch screen. Also, I still feel like the physical button would generally be more reliable than the touch screen.

All these differences seem to suggest that Osmo is actually a better deal especially when it's literally cheaper than GoPro. However, in the end, I went with GoPro 8 because to me, the wider field of view and the various FoV options of GP8 is more important than anything.

Lack of front-facing screen definitely sucks but I didn't think it's that big of a deal. The field of view on GP8 is so wide that you would always be in the frame. Also, if you really need to monitor how the shot is framed, you can always do it by connecting the camera to your smartphone. When you end up really really needing the actual screen, you can wait and get the stupid expensive add-on screen. Again, I think it's very stupid but it's still a viable option.

It sucks that I have to spend extra $50+tax and carry that huge adapter around with me when I need better audio but it's better than nothing. I am just glad that I am able to use an external mic. Fortunately, there are various nice cage accessories that make the carrying adapter less painful.

Again, both are very capable camera but they have clear pros and cons. I think it would all come down to what you want to shoot and how to shoot it.

Mainly going to be shooting my young kids indoor and outdoor. The live photo feature on GP8 is a great feature.

Dell Is Discounting Back-to-School Essentials for Students of All Ages
Copy Code & Open Site More Deals from
Did this coupon
work for you?
Copy
Link Copied to Clipboard