The Great Hunt: Book Two of 'The Wheel of Time' (Kindle eBook) EXPIRED 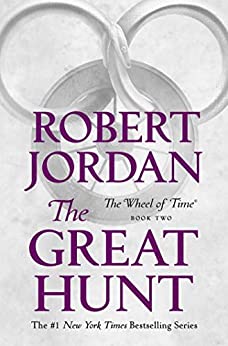 powerfuldoppler posted this deal. Say thanks!

He did die but it worked out. He knew that it was coming and left his wife (editor) with copious notes and instructions to find the right person to complete the series. She chose Brandon Sanderson (amazing author) and he did a phenomenal job with the final books. Don't hesitate to read the books thinking that there isn't an ending. There is and it is quite satisfying.
*tugs his braid and mumbles about how woolheaded boys are*

06-22-2020 at 11:56 AM #10
Should be insta-FP! Thanks, as always, PowerfulDoppler
0
0
0
1
Reply
This comment has been rated as unhelpful by Slickdeals users
Joined Mar 2010
L17: Robot
2,558 Posts
598 Reputation
06-22-2020 at 12:12 PM #11
Yeah, RJ would have done a better job since it was his series. BS did a decent job but I could tell much was left out that would have been expanded upon with RJ.
One example - the forging of Power Weapons, RJ would have expanded upon it, BS - wrote about it once and they never made any more, even though they had the capability... uh huh
4
0
0
1
Reply
This comment has been rated as unhelpful by Slickdeals users
Joined Jul 2016
L2: Beginner
51 Posts
13 Reputation
06-22-2020 at 12:36 PM #12
Totally agree. I read them all, and while some of RJs later books were slow in advancing the plot, I still found his writing and character depth an order of magnitude better than what BS was able to convey in wrapping up the series. Some of BS' stuff is enjoyable, but when you are cranking pages out as fast as he has in the last decade, they just aren't going to be as refined, as thoughtful or written in as nuanced or clever a manner as some others in the genre, e.g. Rothfuss, Hobb or even grittier writers like Abercrombie or Lawrence. Most fans suspected RJ would die before the series was concluded. I personally wish it had just been left unfinished in hindsight.
2
0
0
1
Reply
Last edited by Triode June 22, 2020 at 12:40 PM.
This comment has been rated as unhelpful by Slickdeals users
Joined Nov 2011
L1: Learner
14 Posts
10 Reputation
06-22-2020 at 12:50 PM #13
The first three books are great, very fast paced and you get a lot of plot line advancement that really sets up the absolute slog that the other books become thereafter. That is not to say that the serious isn't worth a read, if you love a tremendous amount of detail and side story you will probably enjoy the series, and there are some very good moments in all of the books. Some of them just go on far too long, lol.
1
0
0
0
Reply
This comment has been rated as unhelpful by Slickdeals users
Joined Jan 2007
L8: Grand Teacher
3,031 Posts
1,244 Reputation
06-22-2020 at 12:52 PM #14
SWEET...

Lululemon Never Has Sales - Until Now! Plus, Daily Deals

Buy Now or Wait? How to Maximize Your Savings in July
Copy Code & Open Site More Deals from
Did this coupon
work for you?
Copy
Link Copied to Clipboard