spinefan
+20 Deal Score
17,749 Views
Link for reference only. B&M only, Autozone web guys couldn't find it when I called but it was sitting on the shelf at the local store. Appears to be their regular price, not sure why they're $100 cheaper than any other seller. Maybe even cheaper with a coupon.

Yeah, I know, Boss audio isn't known for high quality but for $250 out the door at your local Autozone, you're getting a LOT of bang for not much buck. I looked around and the closest big name that compares feature to feature is an Alpine unit that is $999. I've had it in my car for a few days and I'm very happy with it. So much so that I bought a second one for my wife's car. When I bought the second one, I mentioned that I was trying to buy it online as there was a discount available but it shows as in store only. The guy at the store gave me a 10% discount. YMMV.
Waiting on the install kit to be delivered so I can install hers. Single DIN so if you have double din like our cars, you'll need a kit with some kind of space filler. Crutchfield said it doesn't "fit" my car as but it went in using the same single DIN kit I got from them for the JVC (No screen or carplay and the Bluetooth was going out) I replaced with this one.
Crutchfield, Amazon, etc. all have this unit for $329. Good reviews at that price. For $100 less than that I imagine the reviews would be even better.
Unit comes with 3 year warranty from Boss. Autozone also gives a 1 year in store repair/replacement warranty with this unit. Details on your receipt. 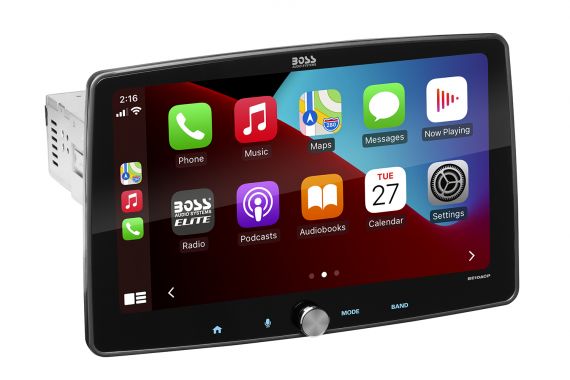 spinefan posted this deal. Say thanks!
Add Comment
Reply
in Autos (8) Get AutoZone Coupons
If you purchase something through a post on our site, Slickdeals may get a small share of the sale.

01-17-2021 at 09:27 AM #16
Crutchfield carrying these is what made me even consider it. Being $100 cheaper is what made me buy it from Autozone. When I saw the 1 year Autozone warranty come up on the receipt, I was really happy with my choice.

0
Reply
This comment has been rated as unhelpful by Slickdeals users
Joined Feb 2008
L9: Master
5,311 Posts
687 Reputation
01-17-2021 at 10:24 AM #17
I saw a couple of reviews saying that the steering controls didn't work despite being hooked up. I can't find much information on this unit but are the inputs learning/programable like there are on most modern head units (it would be in the settings somewhere)? If there aren't, then I don't have much hope for it. Also, regarding the illumination, the reviews that complained about it said it was fine in urban areas but was bad (even on the dimmest setting with the dimmer on) on dark roads.
It's a shame that JVC (and now Kenwood since they're in bed with them) has slipped so much in quality. Had all kinds of problems just like you did with yours on my DMX125BT just like you have with your JVC and there's no way to power cycle it while driving down the road other than shut the car off and restart it (the power button is merely just a "sleep" button). Many times I wanted to rip it out of the dash and toss it out the window while driving. Seems like it only acts up in heavy traffic too LOL. It's shame, JVC used to make solid entry level head units (great bang for your buck stuff) and Kenwood was great midrange stuff with nice solid displays. Of course there was many more brands back in the day like Clarion, Bluapunkt (sold their name), Eclipse, etc. Now the only decent ones are Alpine, Sony, and Pioneer it seems. It's mostly the car manufacturer's fault since most modern car stereos are non-replaceable since they incorporate a bunch of other crap into the stereo (info-tainment units). A few more years and these aftermarket head units will be a retro thing.

0
Reply
This comment has been rated as unhelpful by Slickdeals users
Joined Feb 2008
L9: Master
5,311 Posts
687 Reputation
01-17-2021 at 10:42 AM #18
Yeah, I think you get an extra year with Crutchfield from what I can tell (something about being a platinum vendor or some crap). I've been ordering from Crutchfield though for 30 years since I first heard of them (back in mail in order catalog days). Sometimes if it's a little bit less on Amazon or something then it makes more sense to just order from Crutchfield since you get free installation gear plus support. The support thing really comes into play when dealing with something like a car alarm or remote starter. You never know what kinds of issues you're gonna run into.

Also, has anyone else found this headunit at this price? Curious if this was a one off thing or not a lot of stores have it. Or maybe it was some sort of price mixup (don't want the alert the reseller crowd with the other word LOL) since the other two multi media head units (the ones they have on their site) are priced slightly less on Amazon. Wondering if they even have it at my local store (that one seems to be really small and has a bunch of nothing) so I'll probably have to drive to a bigger Autozone that's around 15 miles away.

01-17-2021 at 08:16 PM #19
I found out about the deal from comments on the YouTube review. I stopped by my local store thinking the guy that commented got a one off or mixup but there it was. I went back a couple days later to get the second one and the counter guy said they'd have it in the next morning or I could drive to another store about 10 minutes away. I wasn't in a hurry so I picked it up next day.

0
Reply
This comment has been rated as unhelpful by Slickdeals users
Joined Feb 2007
L2: Beginner
570 Posts
01-17-2021 at 10:50 PM #21
Generally I'd pass on Boss but the fact that crutchfield carries this brand along with some recent, decent reviews on YouTube is swaying me to reconsider the newest decks for my needs which aren't 100% based on top quality audio. My subwoofer days are over.

At this price I'll be stopping by my local autozone tomorrow.

0
Reply
This comment has been rated as unhelpful by Slickdeals users
Joined Feb 2008
L9: Master
5,311 Posts
687 Reputation
01-18-2021 at 07:50 AM #22
They seemed to be priced about the same looking around online. All I was pointing out is that I don't think this is anywhere near comparable to a thousand dollar unit like he was suggesting. It has a nice large screen but that's the main standout since it's lacking in a lot of other departments. And I would bet the farm that it isn't of the same quality and durability. It's a good sale price on a lower end head unit with Android auto.

This comment has been rated as unhelpful by Slickdeals users
Joined Feb 2007
L2: Beginner
570 Posts
01-18-2021 at 09:39 AM #23
Agreed. I wouldn't assume that this has the same sound quality as more expensive units although anyone who's done any research on quality audio decks will skip BOSS.

As I've mentioned in the past my subwoofer days are long gone and WFH I'm not doing much driving so at this price it looks like a really solid option.

0
Reply
This comment has been rated as unhelpful by Slickdeals users
Joined Feb 2008
L9: Master
5,311 Posts
687 Reputation
01-18-2021 at 01:21 PM #24
Well, just as I suspected, they didn't have it at my local store. They had 2 Dual head units on the shelf and 2 Boss ones (lower end ones). Now they did have an empty spot on the shelf with a little price tag and it said Boss Car Play and it was $199. Anyone believe that's the same one or do they have another carplay one (maybe like the typical 7" in-dash size)? If that price tag was for the 10" one then maybe the price varies by location.

0
Reply
This comment has been rated as unhelpful by Slickdeals users
Joined Feb 2008
L9: Master
5,311 Posts
687 Reputation
01-18-2021 at 06:06 PM #26
I'm going to hit up a much larger Autozone on my way home tomorrow and see if they have the BE10ACP. Like I said in a previous post, this must be some sort of price mixup because the zone's prices are very similar to Amazon's from what I can see and it's way too new to be on clearance (Amazon says that's it's only been available since Nov '20). I was looking at Amazon and the only one at that price with carplay is this one [amazon.com]. Since it wasn't on the shelf I can only guess if that was it or not, why can't Autozone have what they sell in store on their site too? Maybe it's just mis-categorized on their site and will only come up if you look up the sku/item #. Anyone who's bought this care to look on their receipt to see if it's on there? May cut down on the wild goose chases.

0
Reply
This comment has been rated as unhelpful by Slickdeals users
Joined Feb 2008
L9: Master
5,311 Posts
687 Reputation
01-19-2021 at 03:40 PM #30
Made it to the larger autozone that I wanted to go to and grabbed one of these today. They had empty boxes on the shelf and you take it to the front and the go in the back somewhere and get it for you. The item # seems to be 001080908 BE10ACP but nothing comes up on their site even with that. I'm assuming that this is a newish item and they don't even have it on their site yet, but who knows. And the $199 one I saw an empty spot for yesterday at the smaller store is the BE7ACP which is priced the same on Amazon [amazon.com]. Everything else they have seems to be priced the same on Amazon so I still believe that this is some sort of pricing error on their part. Was also able to get the 10% off like the OP. All I said was that I wanted to order it online and use a 10% off I had, but couldn't get this item to come up on their site (which is the truth - probably would've just ordered it online to save the hassle of trying to find it). Might be able to get this thing installed tomorrow. Should go in fairly easily since I already have an aftermarket headunit in already. Biggest fear is that I have to dig and see if I have a blank for my double DIN dash adapter (have a double DIN in there right now but pretty sure the kit was either or).

Best Credit Cards for Gas in May 2021: Compare Rewards and Sign-Up Bonuses