Slickdeals Forums Deal Talk 34" Acer EI342CKR 3440x1440 QHD Curved Gaming Monitor (Refurbished) $325.59 at Acer via eBay
Advanced Search
Sorry, this deal has expired. Get notified of deals like this in the future. Add Deal Alert for this Item
Popular Deal 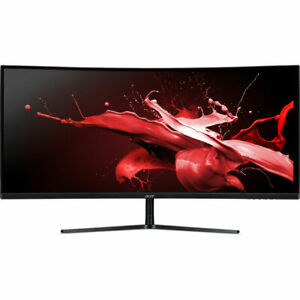 Robotech17 posted this deal. Say thanks!
Add Comment
Reply
in Monitors (4)
If you purchase something through a post on our site, Slickdeals may get a small share of the sale.

3
Reply
This comment has been rated as unhelpful by Slickdeals users
Joined Mar 2014
L7: Teacher
2,288 Posts
327 Reputation
05-12-2021 at 07:24 AM #4
Anybody having experience claiming the Allstate warranty that seems to come with all eBay refurb items? Are they actually legit or just BS

0
Reply
This comment has been rated as unhelpful by Slickdeals users
Joined May 2016
L3: Novice
208 Posts
Our community has rated this post as helpful.
05-12-2021 at 10:15 PM #6
Alright here's my review on this monitor. I bought this last time it was slightly cheaper.
I would avoid this monitor for the reasons below:

1) Mine arrived with 2 dead pixels. Seller said refurbs are allowed 5 dead pixels. They did offer me a refund no problem but the dead pixel limit is not listed so if I had know I wouldn't have ordered.

3) This monitor has REALLY bad ghosting. I kid you not. I'm not particularly sensitive to things and I don't care if a panel is VA vs IPS. But my bro brought this monitor for BF and said he returned it cause he made him nauseous. I decided to try it for myself.
And the first day, I played Warzone for about an hour and the room was spinning for 10-15 mins after I finished, and my felt woozy the rest of the day.
After a few days I got used to it but the first 2 days I had a headache and major eye strain.

I ordered a Gigabyte G34WQC for $429 at BH ($399 with $20 rebate) instead. and I have both monitors in my possession so i figured I should side by side compare.
The Gigabyte is built better in everyway. It doesn't shake like crazy on a filmy stand like the Acer.

When I use testufo.com/ghosting to check ghosting, the Acer literally makes my eyes hurt and it makes me motion sick. Its super blurry I feel like if I stare more than a minute ill throw up.
The gigabyte is smooth. It has ghosting too like any VA panel but it's smooth and not at jittery.
When playing FPS games, esp like warzone with high FOV and you're moving around fast, the acer made me feel real queasy.

All in all, I'd say after you add in a price of a displayport cable and what not, it's worth it to just get the gigabyte model or an AOC.

1
Reply
This comment has been rated as unhelpful by Slickdeals users
Joined Nov 2015
L3: Novice
265 Posts
56 Reputation
05-13-2021 at 03:15 AM #8
I also got it too and didn't noticed the ghosting until I tried the link. I think it depends on use, I don't use it as much for gaming since it's hooked up to my Mac mini. I just wanted to add it doesn't include the mounting screws if you want to mount it. I ordered some from eBay for under $10.
I also noticed that DVI to HDMI doesn't work for me, I'm not sure if it's my cable I tried connecting it to my PS5 and Laptop, but it doesn't detect.

This comment has been rated as unhelpful by Slickdeals users
Joined Apr 2015
L3: Novice
221 Posts
22 Reputation
05-13-2021 at 03:21 AM #9
I did for my Acer monitor. Monitor stopped working after 30 days and Acer wanted me to ship it to them for repair (150$ monitor will cost 115$ for shipping) . I raised a claim in Allstate and they paid me 128$ for fixing the monitor. Won't buy from Acer any refurbished product but will buy the warranty from allstate again