Slickdeals Forums Deal Talk Babylon 5: The Complete Series Bundle Digital HD $39.99 Vudu
Advanced Search
Sorry, this deal has expired. Get notified of deals like this in the future. Add Deal Alert for this Item
Popular Deal

DarthWoo
+35 Deal Score
5,692 Views
The remastered HD version of Babylon 5 is currently on sale on Vudu for $39.99. It was last this price in April, so for anyone who missed it, this is a good time to get it. 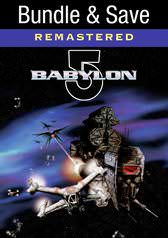 DarthWoo posted this deal. Say thanks!
Add Comment
Reply
in TV Series & TV Shows (3) Get VUDU Coupons
If you purchase something through a post on our site, Slickdeals may get a small share of the sale.

Our community has rated this post as helpful. If you agree, why not thank ?
07-20-2021 at 08:17 AM #4
There's no remastered physical box set yet, and these shows go on and off the streaming channels. It's nice to have it in your own library if your a fan and want to always have access. To each their own however.

07-20-2021 at 08:27 AM
So I never saw this when it aired and don't have the nostalgia factor. Tried watching it recently and it does not hold up at all. Pure garbage town.

0
Reply
This comment has been rated as unhelpful by Slickdeals users
Joined Oct 2010
L6: Expert
1,812 Posts
151 Reputation
07-20-2021 at 10:26 AM #7
One of the best sci fi shows. The cgi/fx hasn't aged well but JMS (J. Michael Straczynski) created a great story over 5 seasons. It had a proper closure, ie it wasn't cut short by the networks. Great acting all around. Some areas may not have aged well but still an amazing show.

Like all series, it took a while to get good. The first season of most Star Trek series are also mostly trash. Season 1 of B5 is a rough ride, with a fair number of clunker episodes.

While it's okay if something is not for you, you may want to skip some of the early rough stuff. It really begins to shine in season 2.

07-20-2021 at 11:33 AM #9
Season 1 is getting one comfortable in a largely unexplained universe, at times it seems like work, but it is worth it. Season 2 really gets going and Seasons 3 and 4 of B5 contains some of the best stuff put to camera on television. B5 and The Expanse are the top two space fantasy shows ever.

One needs to watch Season One maybe 8 to 10 episodes for exposition. Then a skip can be done to Season Two episode one, Then you'll watch to watch the last few episodes of Season One. Finish the series, then watch all of Season One on the second watch through, which ends up providing a good deal of discrete foreshadowing. The remastering is very good and doesn't make the sets look too cheap. The remastering failed in improving live action mixed with special effects, but the all digital stuff and all live action stuff looks awesome.

07-20-2021 at 11:43 AM #11
"Remastered" can mean anything. I'm also in the camp of not paying for content I don't have a physical copy of. You're betting on Vudu being around in 5+ years. You're also having to pay for the network connection to watch your own content.

I understand the arguments for services like Vudu but I just don't trust the system. This is why products like Plex exist. To each his/her own.

0
Reply
This comment has been rated as unhelpful by Slickdeals users
Joined Oct 2004
L7: Teacher
2,435 Posts
523 Reputation
07-20-2021 at 02:09 PM #13
While "Remastered" can many anything, it means something very specific in this case as the work done was well documented [engadget.com] and a huge improvement over what was originally released on disk thus far.

0
Reply
This comment has been rated as unhelpful by Slickdeals users
Joined Dec 2004
L1: Learner
14 Posts
29 Reputation
Our community has rated this post as helpful. If you agree, why not thank ?
07-20-2021 at 02:32 PM #14
Season one is really bad. There are only about 4 episodes worth watching. Seasons 2-4 are pure gold, season 5 isn't so great and you can skip ~half of it.