Slickdeals Forums Deal Talk Days Gone (PC Digital Download) $25
Advanced Search
Sorry, this deal has expired. Get notified of deals like this in the future. Add Deal Alert for this Item
Frontpage Deal

Thanks to Slickdeals Staff Member f12_26 for finding this deal. 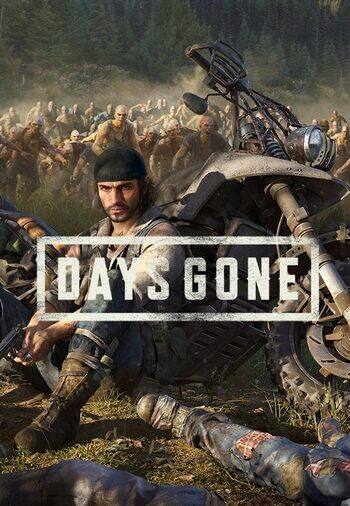 Service fees apply. Use the indicated discount codes to reach the following prices (after coupon and service fees).

Add Comment
Reply
in Computer & PC (5) Get Eneba Coupons
If you purchase something through a post on our site, Slickdeals may get a small share of the sale.

0
Reply
This comment has been rated as unhelpful by Slickdeals users
Joined May 2020
L6: Expert
1,674 Posts
172 Reputation
08-01-2021 at 10:05 PM #17
If you were constantly searching for gas and repairing the bike, you weren't doing it right. You didn't play long, did you? You get bigger gas tanks, and there's pretty much always fuel around, so it's not that big a deal. As far as repairs? Do you just crash all the time? You shouldn't need to repair it very frequently. It's not really a slow grind, either. You can make it a grind, but you can also get through it quickly if you don't feel like doing everything.

0
Reply
This comment has been rated as unhelpful by Slickdeals users
Joined May 2020
L6: Expert
1,674 Posts
172 Reputation
08-01-2021 at 10:09 PM #18
I've been buying codes from them for around a year now. I've bought a lot. Never had a single problem. You'll sometimes hear some people say they had an issue, but that's the minority, and it's kind of a risk whenever you buy from any site like this. Including the most commonly used one, CDKeys. CDKeys has screwed me on several occasions, but then you'll hear the people who say they've never had an issue.

I can't tell you 100% that you won't have an issue, but I can tell you I never have, and the majority of people, at least on here, haven't.

As others have mentioned, it's a slow grind until you get better bike/gun/weapon upgrades. The first part of the game is training on the gameplay/mechanics. Voice acting is awesome. All the character voices do a great job, and the character development is good.

I paid $20 for it and definitely got my money's worth out of it (probably did at least 12 playthroughs).

0
Reply
This comment has been rated as unhelpful by Slickdeals users
Joined Jun 2015
L2: Beginner
38 Posts
22 Reputation
08-01-2021 at 10:13 PM #20
Too much backlogged to to even considered at this price. Its a good price mind you, but last Ubisoft sale got me enough games to last a year or more. By the time I get around to this, its probably going to be $10.

0
Reply
This comment has been rated as unhelpful by Slickdeals users
Joined Oct 2017
L3: Novice
129 Posts
22 Reputation
08-01-2021 at 10:49 PM #21
This is where I'm at now as well. I would pick this up and play this today, but seeing my backlog, I feel silly for overpaying when we know it'll eventually get lower.

0
Reply
This comment has been rated as unhelpful by Slickdeals users
Joined Nov 2010
L1: Learner
12 Posts
14 Reputation
08-01-2021 at 10:53 PM #22
As others have pointed out, this game is a blast. It has a better story and more emotions than even 90% of the movies coming out. Most critics just played a little and then disliked it. The music is great (Jack Savoretti). The ride with Boozer with the song playing will give you goosebumps. I am on my 3rd playthrough and I am getting into the photography. I got it for free for PS4 but will buy it again for PC. Check out the reddit group about the game.

This comment has been rated as unhelpful by Slickdeals users
Joined Apr 2007
L6: Expert
1,666 Posts
354 Reputation
08-01-2021 at 11:40 PM #23
Loved this game, I was comparing it to recent titles and it takes top spot for me. The tedious movement in RDR2 killed it for me and I never finished it. TLOU2 story was so dark and slow. Days gone was more exciting and the gameplay mechanics/movement were butter smooth (minus a few glitches). The upgrade system is well paced and main story was quite long without being a drag. Animation and voice acting is on point. Side stuff, upgrades and bike maintenance keep you busy. Last ofc, the Hordes are so fuuun! Might replay again on PC just for the higher framerate.

The first few hours is slow while you build up trust and resources but i loved the story.

For $25 you will get hours and hours of entertainment. If you enjoy games with grind this is a no brainer purchase.

0
Reply
This comment has been rated as unhelpful by Slickdeals users
Joined Sep 2010
L3: Novice
119 Posts
14 Reputation
08-02-2021 at 02:35 PM #29
game is about a 7/10. Those saying its so great obviously have pretty low standards. I think its wack it got released on PC. Should have just been a Sony exclusive

0
Reply
This comment has been rated as unhelpful by Slickdeals users
Joined Jul 2003
Master Of The Obvious
8,958 Posts
994 Reputation
08-02-2021 at 03:09 PM #30
10 hours or so? Just got bored with it. While I don't crash the bike often, it's more likely because I have been running over some zombies with the bike because they were in the way... If I could just keep a machette all the time it would help with the hordes, but the weapons degrade so fast. The 2x4 and baseball bat are pretty useless, almost better off with the boot knife. And ammo is so scarce (and guns attract too much attention anyway) I tend to only use guns as last resort.

Just feels like Last of Us meets Assassin's Creed or Far cry with all the map events.

OTOH I came to this straight off of Ghost of Tsushima which has similar map stuff/fetch quests but overall a much better game. Hell if this guy could get one of Jin's swords and bows you could clean up.