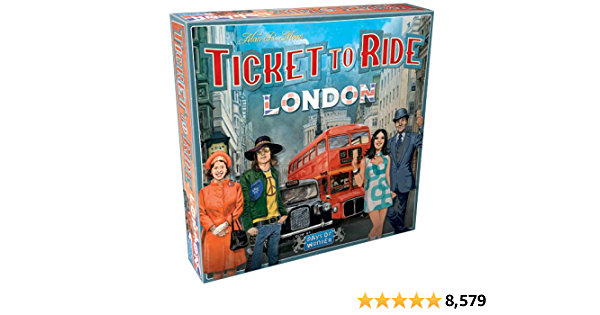 DLS4U posted this deal. Say thanks!
Add Comment
Reply
Created 09-24-2021 at 09:20 PM by DLS4U
in Games, Board Games & Card Games (5)
If you purchase something through a post on our site, Slickdeals may get a small share of the sale.
Deal
Score +10
6,866 Views
$13.99
See Deal
About the OP
Send Message
Pro Staff
Joined Aug 2021 Slickdeals Staff L3: Novice
830 Reputation Points
99 Deals Posted
263 Votes Submitted
213 Comments Posted
Don't have Amazon Prime? Students can get a free 6-Month Amazon Prime trial with free 2-day shipping, unlimited video streaming & more. If you're not a student, there's also a free 1-Month Amazon Prime trial available.

0
Reply
This comment has been rated as unhelpful by Slickdeals users
Joined Dec 2009
Frog Wrangler
4,274 Posts
817 Reputation
09-27-2021 at 04:48 PM #3
My family and I love the regular Ticket to Ride, but this looks like a simplified version. Probably not worth getting this if you already have the original.

0
Reply
This comment has been rated as unhelpful by Slickdeals users
Joined Jan 2014
L3: Novice
227 Posts
215 Reputation
09-27-2021 at 07:56 PM #4
we have both and end up playing this one more, it's a much quicker game with mostly the same gameplay. You get all the fun of the original without the potential 1hr+ time commitment.

0
Reply
This comment has been rated as unhelpful by Slickdeals users
Joined Jan 2005
Geekmaster General
1,464 Posts
398 Reputation
09-27-2021 at 10:24 PM #5
Depends. It's quicker to play, and doesn't take up as much space. Being quicker to play means luck is involved more in an individual game. Of course you can probably play three games in the space of one, so that can even out the luck some. It also means when the cards and other players @#$% you you're not stuck playing forever until a new game. And, of course, it can give weaker players a better chance to win which can be nice.

We enjoy it in addition to the normal TtR, but you're right in that it's primarily just a slightly simplified and shorter version of the main game. Quite similar to New York as well. Buying both of them was probably redundant.