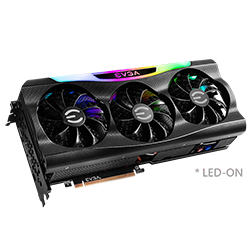 Dinob661 posted this deal. Say thanks!
Add Comment
Reply
in Video Cards (4) Get EVGA Coupons
If you purchase something through a post on our site, Slickdeals may get a small share of the sale.

It all depends on the card, but my 3080 Ti FTW3 would be in the upper 70's or lower 80's depending on ambient temp. My 3090 would sometimes hit 90c+ due to just having a backplate on the memory connected with pads, and nothing else.

I never said failure, but degradation is a real thing on some 3000 series cards. Simple internet search (pick your search provider) of 3090 VRAM degradation will point you in the correct direction. The FE cards are most at fault hitting over 105c in general regardless of which FE card, but AIB cards can be tricky too. Even across identical cards, temps can fluctuate.

And as an additional note, I replaced the rear pads with a copper plate (for direct contact to the backplate) just for testing sakes, and that dropped my memory junction temps by 6c. This proves the original pads aren't the greatest.

I also added a heatsink on to the backplate afterwards and that dropped it another 10c. After all said and done, was getting in the low 70's for memory junction temp. Did I need to do all of this? Probably not, but I want my card to last a long time. I've attached pics of my mods. 20c+ memory drop when all was said and done.

Where do you think RMA'd cards go for pissed off miners that couldn't sustain their mining memory OC because they degraded their chips? Granted I don't know the percentage of this, but it's definitely not 0 from reading through various forums and posts elsewhere.

All I am saying is for people who buy this B-Stock card, or any B-Stock card, it doesn't hurt to test even a mild OC on the Memory.

Everyone makes mistakes in assuming, so I won't trash talk you because of it.

FarCry 6 got Memory junction temps pretty high for what it's worth. Not sure if any games in the future that are VRAM intensive will.

There are none. There's just a bunch if chicken littles misreading datasheets and the tech press (Igor specifically) going off half cocked.

Feel free to mod your card all you want for improved temps, but please stop spreading baseless misinformation.

- Any GDDR6X failure due to high temps

- Any GDDR6X failure due to mining.

This comment has been rated as unhelpful by Slickdeals users
Joined Oct 2014
New User
10 Posts
14 Reputation
05-22-2022 at 08:32 PM #23
My friend used his 3090 to mine which I helped to put extra heatsink on backplate to keep the memory junction temperature to 90 C degree. However, the card failed within one year showing black screen upon gaming launching or miner starting. I tested with memtestG80 and confirmedVRAM failure. He RMA'ed the card and got a refurbished one.

Do you know his preferred mining settings?

What was the make and model of GPU?