Note, be sure to select the 'HDX' option. All films listed below are Movies Anywhere (MA) compatible.Amazon also has select Disney Digital HDX Movies on sale for $7 Each.

Note, be sure to select the 'HD' option. All films listed below are Movies Anywhere (MA) compatible. Eligible Amazon Prime members may redeem earned No Rush Shipping credits (learn more). 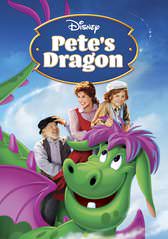 Note, be sure to select the 'HDX' option. Film(s) is Movies Anywhere (MA) compatibleAlso available via Amazon

06-03-2020 at 12:01 PM #15
I agree with you that $7 is too much for digital only, even for a Disney movie. I often bring up that with Disney Movie Club (a huge thread exists about this on the Blu-ray dot com site) it should be possible in an enrollment cycle to get physical Blurays of movies like these for $7-$8 each net.
Same here. I know I'm in the minority on this view, but I liked Pete's Dragon more than Mary Poppins. I watch Pete's Dragon about once a year (it's one of my special titles I can never watch too often) vs. Mary Poppins every couple years. Most people rate Mary Poppins first (and it's truly awesome), but I met one person long ago who was even more fanatical over Pete's Dragon. She could recite the entire movie and every song perfectly. I can do it about 75% but not perfectly. The Sherman Brothers did many excellent movie songs for Disney, but it seems Kasha & Hirschhorn only did Pete's Dragon. I've never heard anything else in their music list. Jim Dale, Red Buttons, Mickey Rooney, even Helen Reddy were fine. I have always been sad that Jim Dale was only in 2 Disney films. Without a doubt, Doc Terminus is my favorite character in Pete's Dragon. "What is L-L-L Dra-Dra-Dra?"

Bedknobs and Broomsticks is a classic too, but much slower and some kids get bored by it. Going from Pete's Dragon to The Black Hole (and Last Flight of Noah's Ark) was a shock to me as a kid. I believe it was the first ever Disney movie I walked out of the theater and told my parents I hated it. Up until then I liked everything Disney did no matter how silly. Some decades later I saw The Black Hole again. It's watchable, but doesn't feel like a Disney movie. It feels like a low budget sci-fi flick.