This air purifier had great reviews on wirecutter [thewirecutter.com]and, at this price, seems like a great deal for people with larger rooms. This deal is $11 lower than the previous FP deal here.

Specs:Edit:
Looks like Amazon picked up the deal too - Link [amazon.com] 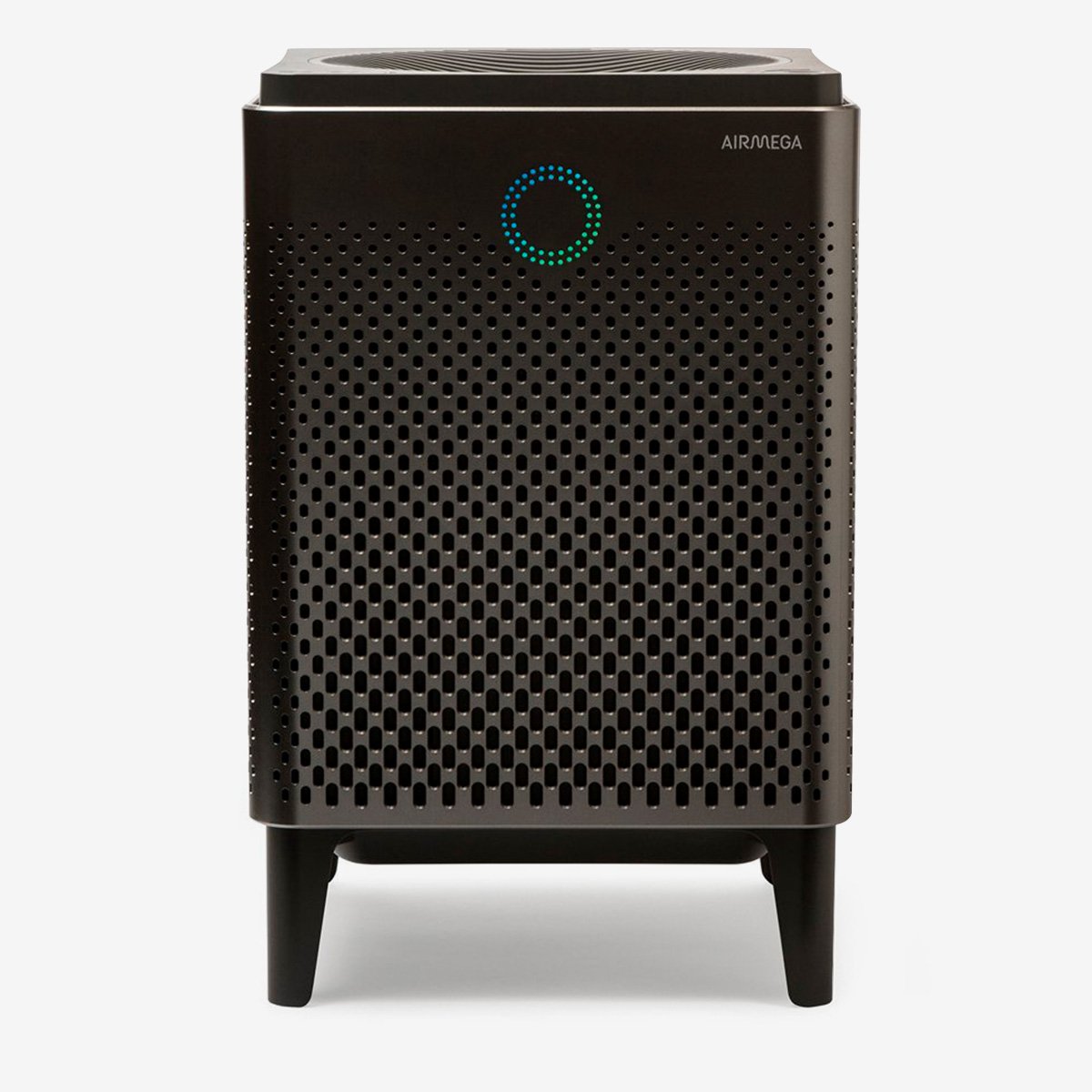 wNb420 posted this deal. Say thanks!
Add Comment
Reply
in Air Purifiers (5) Get Walmart Coupons
If you purchase something through a post on our site, Slickdeals may get a small share of the sale.

In auto mode, it's terrible at sensing changes in air quality. The way auto mode works is it turns the fans on for 10 mins every hour, or something like that. The air it draws in seems to be the air it samples to determine its quality. If it's good, it will shut the fans off until it's time to turn them back on again. It seems to miss a lot of cooking smells even when the fans turn back on again.

I used this in the exact same spot as the Coway Mighty, the one Wirecutter recommends for most people. The Mighty was able to eventually sense the cooking smells and spool up until it toned down the smells a bit. The AirMega, however, may have only reacted on auto mode once or twice when I had it set up in the same spot in the kitchen. So the Mighty stays in the kitchen and I moved the AirMega to a bedroom.

In the bedroom, for the past month, I just leave it off of the auto setting completely and leave it at low. It works fine and it picks up a ton of dust in the bedroom. When I go to bed, I bump it up to medium because I sleep hot and this thing sort of doubles as a fan in terms of cooling the room in addition to ventilating. My bathroom is joined to my bedroom so I do turn it on high while I am in the shower and getting ready because this thing does react to the steam from the shower and probably the smell of soap and shampoo within that humidity and it will turn light purple or dark purple, indicating it senses the change in air quality. This is at the highest setting, though, so it's definitely moving a ton of air around. Which is why I think auto mode on this thing is utterly useless because it straight up shuts off the fans when it feels every thing is good, even when it isn't. So this things effectiveness is dependent on how much air is being moved which means it depends on how high the fan setting is at in the first place.

So basically, you have to kind of babysit this thing some times and manually change the settings depending on what you're doing, but when it works, it seems to be trapping a good bit of my hair, my dog's hair, and lint and dust that may come from my clothes.

I have had to clean the pre-filter on this thing much more frequently than I have on the Mighty. So its trapping more dirt, I guess, because it can pull in about 4-5 times as much air than the Mighty.

The Mighty units we have, two of them, seem to do just fine on auto mode. They react appropriately and do a good job. This AirMega isn't as "smart" on the auto mode, so leaving it at low or medium all the time will probably be best for most people. Unless you have a shower connected to the room the AirMega is in, which in that case just turn it on high before a shower to help with the humidity and turn it off about 10 mins after your shower and put it on medium or low for the rest of the day.

I bought this from Amazon for $354 in early November and used a CB site to get about $20-30 back and then my power company gives $50 back on this model via rebate, which I have yet to fill out. But this is a good deal though I haven't seen it much higher than this on Amazon. Home Depot and a few other places sell this too and I've seen it fluctuate to Amazon's prices and then back up to 400 or $500+. I think Home Depot and Sylvane's website had the lowest prices for filter replacements but I haven't had to look at those as yet.

I just got the Airmega 400 a couple of weeks ago, and so far the Auto mode works just fine for me. I normally keep it in the bedroom and run it on Auto at night. The other day I had some cooking fumes in the kitchen, so I moved it there and it very quickly detected the air quality and kicked the fan up to high and ran it until the air quality improved. I did change the sensor sensitivity to high though (default is medium).

It's been with me for 2 moves and the best thing about it is that you can set it and forget it. The visual indicators for cleaning the pre-filters are great and should be replicated on just about everyone. One thing to note you should probably set the setting to 4 weeks because typically 2 - 3 weeks you really won't get much on the filters to even bother cleaning them.

Whenever I cook the Airmega kicks on sometimes before I can even smell that something is burning. Or when my wife uses her aersol hairspray its kicks on automatically within 15-30 seconds. So those who are on the fence about purchasing these, don't. While their filters are more expensive they really keep the house smelling super clean. And I have two 80 pound dogs who live with me.

When the air filter is knocked out because I pulled the cord on accident, I could definitely smell the dogs!
Reply Helpful Comment? 2 0
Last edited by Styxx January 21, 2020 at 07:37 AM.

So, I'm pretty sure you're mistaken. I don't believe you got the 400 "S" for $310. Maybe, maybe you got the 400. And if you did, then that's a slick deal, congrats. But this deal is smoking. The only real argument though is whether the Smart feature is necessary, or if you could just use a smart plug. I own two of the Airmega 400 and I use smart plugs for both of them. It remembers your last setting so it makes the smart mode less useful. All that said, I'd buy the S for $350 if presented with the 400 standard at $310..l just my two cents.
Reply Helpful Comment? 0 1
Last edited by davidus1 January 21, 2020 at 08:02 AM.
This comment has been rated as unhelpful by Slickdeals users
Joined Jul 2013
Lurker
211 Posts
150 Reputation
01-21-2020 at 07:54 AM #14
I'm a little confused about the price of this deal. The last deal I seewas at $310 not $366. If you look at the price history from Keepa, it shows that as well. Was there something I'm missing?
Reply Helpful Comment? 1 0
This comment has been rated as unhelpful by Slickdeals users
Joined May 2019
New User
12 Posts
10 Reputation
01-21-2020 at 07:58 AM #15
Just in case this helps anyone guide their purchase... I own two of the 400 units. I originally bought the first one because I had a mold issue in my live-in basement. It was pretty dank. I have a dehumidifier that runs intermittently and some d*mmy AirBnb guest turned it off. Anyway, bought this because I needed something that could cover a large area and improve the air quality quickly.

I have to tell you, from the moment you unbox this thing, you can tell that it is absolutely top-of-the-line quality. I mean its REALLY nice. And after 1 day, the air quality downstairs was a total 180. Its never been that comfortable. The light indicators also give you such piece of mind because its almost like having a live sensor to tell you the air quality.

Anyway, I love it. I bought a second one for our bedroom because we have a newborn. And frankly, I'll probably buy two more with this deal. The only thing I'm bummed about is that they don't have the white on sale. Mostly because I already have the whites, and also because the white matches our aesthetic more. I mean it honestly enhances the look of your space...as strange as that may sound.
Reply Helpful Comment? 0 0
Page 1 of 3
1 2 3
Join the Conversation
Add a Comment
Deal Alerts

Just a Bunch of Deals on This One Sick Knife
Copy Code & Open Site More Deals from
Did this coupon
work for you?
Copy
Link Copied to Clipboard