I was doing a lot of info digging on what HP 6SK99UT#ABA was, and there was a lot of misleading image posted on Provantage, Newegg Business, and even HP website doesn't have any information on it. And, I was betting on a specification that posted for ZBook G4 without specifying the P/N.

This drive is essentially better then Samsung SSD 970 PRO (based on specs) at a fraction of the price. You can look up the specs on Samsung.com.

The only drawback is that it's only 1-year warranty due to OEM. If you use credit card, you can take advantage of extended warranty to move it to 2-year. 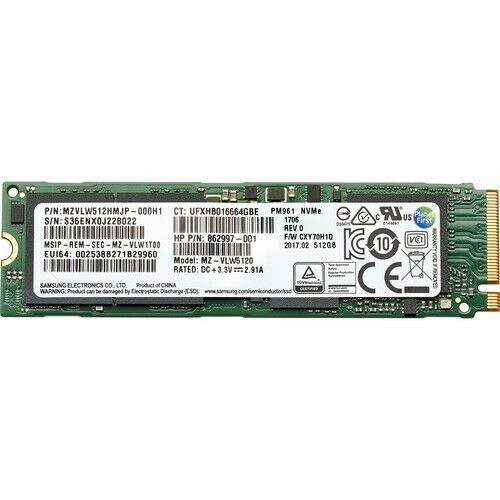 sennix posted this deal. Say thanks!
Add Comment
Reply
in Hard Drives (7)
If you purchase something through a post on our site, Slickdeals may get a small share of the sale.

I would describe this as an OEM version of the 970 EVO. SM-prefix/PRO models are MLC and not TLC.


I would consider this to not have a warranty at all. You'll have a hell of a time trying to get HP to warranty a drive that (likely) was pulled out of one of their prebuilts. And Samsung certainly isn't going to warranty a drive sold through their OEM channels like this.

Yeah I know, the listing claims a warranty, and SSDs don't fail much... but I'm just pointing it out. Don't expect a warranty, or at least expect a lot of hassle in that case.


At the end of the day, this is a premium-tier SSD at slightly less than premium but still well above $100/TB bargain basement TLC pricing. Add the part where it's OEM-labeled and doesn't have the sexy 970 EVO branding to go with it, and are you surprised people don't jump?

Honest question, maybe I missed something..
3
0
0
0
Reply
This comment has been rated as unhelpful by Slickdeals users
Joined Mar 2018
L3: Novice
292 Posts
51 Reputation
06-14-2020 at 08:03 AM #13
Using sequential writes that the everyday consumer doesn't utilize. During normal random read/writes these are within parity of SATA SSDs.