Slickdeals Forums Deal Talk Gooloo 12V 1500A Peak Jump Starter Water Resistant Car Booster for Up to 8.0L Gas or 6.0L Diesel Engine $43.43
Advanced Search
Sorry, this deal has expired. Get notified of deals like this in the future. Add Deal Alert for this Item
Popular Deal

fakespot rating of this item is a B 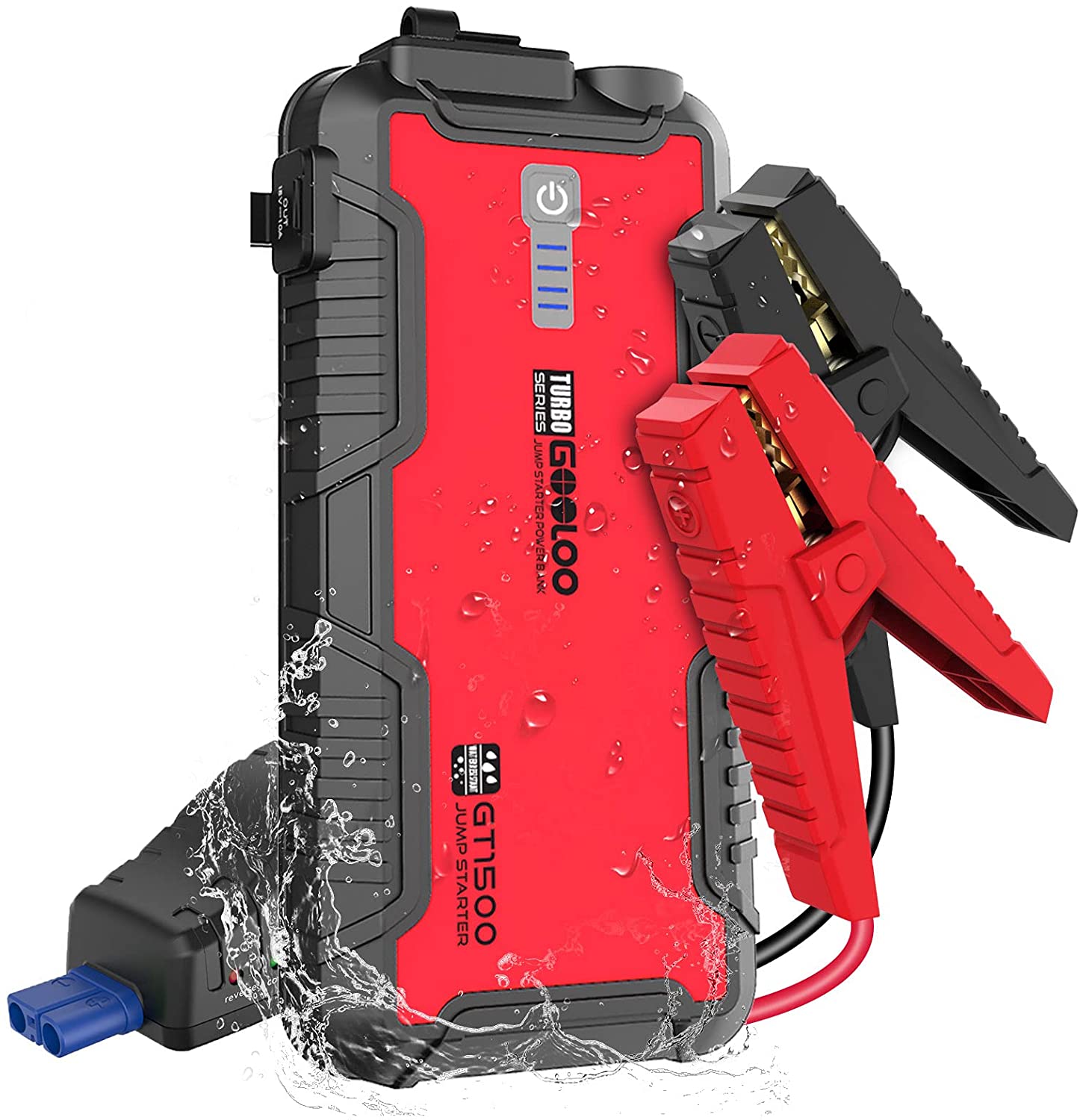 ERSD posted this deal. Say thanks!
Add Comment
Reply
in Automotive Tools (8)
If you purchase something through a post on our site, Slickdeals may get a small share of the sale.

0
Reply
This comment has been rated as unhelpful by Slickdeals users
Joined Dec 2017
L2: Beginner
98 Posts
26 Reputation
04-26-2021 at 05:39 PM #4
I have an older model and I've used it to jump start a Honda Pilot and my v6 Tacoma. No issues. Also jumped my neighbors riding mower, took about 5 seconds of cranking to start that one.

0
Reply
This comment has been rated as unhelpful by Slickdeals users
Joined Jun 2018
L3: Novice
167 Posts
37 Reputation
Our community has rated this post as helpful. If you agree, why not thank ?
04-26-2021 at 09:30 PM #5
I have similar jumpstarters from gooloo. Mine is elite series 1500a. This one is turbo series 1500a. From what I see both seems to be similar. I think turbo series might be build to be for rugged use. And might have better water resistance. All the in and outlet seems to be same too.
It jumpstarts l4, v6, and v8 engine easily. I was so impressed I bought 2nd jumpstarters for my partner.
My 2nd jumpstarters had charging issue. I contacted gooloo and they send me a replacement, right away. Now, I have 2 good jumpstarters and a bad one for parts.
If you purchase this jumpstarter, I would suggest fully charging and testing it right away. That way if it's defected you can get replacement right away. Don't wait till your car need jumpstart.

Here is a video that explains difference https://youtu.be/ZMfo4mk3eIw

Note, some will point to the Project Farm review but this test is not relevant to a super capacitor based jump starter. His test sees which will try to start a large diesel the longest. A supercapacitor is not a battery, it discharges enough to start a car or small diesel. It's electronics will stop the load after a certain time, so its not going to keep trying to start a large diesel like a battery. Also, his test assumes you are using a freshly charged new jump starter. Try his test with 2 year old items that have been sitting in a trunk and see results. The super capacitor would be the only one that would work. Even if you freshly charged all the batteries up, it would still probably win since the lithium batteries would not hold a full charge anymore (if any). Also his cold test is flawed since he freezes the item then lets it warm up. In reality, you are not going to be able to warm up your jump starter if you are stuck in -20 weather.

Project Farm test is good if you want to know how good a fresh charged starter will last, not a maintenance free item stored in a trunk of car during summer and winter for years until needed. His test is for someone living on a farm that has the it near a barn and needs to start a tractor near the barn say. Not someone who is stuck in a parking lot on a cold day that left the dome light on while they were inside at work all day and needs to grab something that has been sitting in trunk for a while.

So, if your need is an item you just want to store in trunk until needed (maybe years from now) then the GooLoo will not be what you are looking for, you would want something like the Autowit

04-27-2021 at 07:02 AM #8
I have a lesser and older model Gooloo lithium ion battery/jump starter (supposedly up to 800 amps). It hasn't provided enough juice to jumpstart my Chevy Cruze (1.4L engine) nor my boss's crossover (no idea on engine size but definitely more displacement than my hatchback). In each case, it was fully charged. For the Cruze, usage was during subzero weather. It has, however, trickle charged both enough that after some period of time (an hour+ maybe?) that the car batteries have been charged enough to start themselves.

It looks like I paid ~$40 for mine. It's definitely come in handy, but I'd be extremely skeptical about jump starting larger engines. If I were doing it again, I'd recommend paying more for more overhead or a better-known brand.

0
Reply
Last edited by anjichpa April 27, 2021 at 07:03 AM. Reason: add usage details
This comment has been rated as unhelpful by Slickdeals users
Joined Nov 2006
L10: Grand Master
6,038 Posts
757 Reputation
04-27-2021 at 07:15 AM #9
I recently used the 2000A version of this to jump start a car with a completely drained battery, and each time it started up immediately. The one negative (no electric pun intended) is that even though it had been fully charged recently and stored in the trunk of a car, where temps have ranged from 35-75 of late, it was down to 3 out of 4 capacity bars after just a few seconds of use (including pressing the "boost" button on the charging cable).

Seems like an awful lot of capacity to lose with just a few weeks of sitting around and one quick if high-powered charge. Perhaps this is a function of the underlying LiOn battery technology, or maybe they used older cells and that's why it was on sale, to get rid of old stock. In any case, it works, just make sure to keep it charged.

As for supercapacitor-based starters, my use case shows precisely why they're not useful as primary jump starters, as they wouldn't have worked in my situation, which I think is quite common (e.g. leave lights on all night, battery goes completely dead, although in my case it was probably keeping the trunk open while working on the car all day, which kept the interior lights on and drained the battery). At the very least they should come with small internal LiOn batteries to tap into for such cases, or be able to be charged externally, within minutes. Otherwise, stick with LiOn starters, and, again, keep them charged.

Also, why don't modern cars come with built-in LiOn chargers, kept automatically topped off when the car is run, and kicking in when needed, with perhaps supercapacitors included in case the LiOn battery's also running low. Perhaps because AAA's business model would be ruined, especially seeing as how its mapping division is irrelevant?

This comment has been rated as unhelpful by Slickdeals users
Joined Oct 2004
L2: Beginner
66 Posts
14 Reputation
04-27-2021 at 07:37 AM #10
I've had this for a couple of years and have used it few times, on cars and trucks. It worked everytime except once on a Ford F-150 that was completely dead and needed a heavy duty charger plugged in overnight to get it charged again. re KMan post, I think the charge level of 3 out of 4 bars indicates the amount of charge available, not the Only amount of charge available; therefore if it has 95% charge, it could only show 3 out of 4 bars still, since 4 out of 4 would mean 100%.

I've got 2 of these. One in each car. THey've done a great job for me on several occasions until I replaced a battery that was going dead. Held their charge well (you need to charge them every 4 to 6 months) and have had no issues.

0
Reply
This comment has been rated as unhelpful by Slickdeals users
Joined Dec 2016
New User
245 Posts
10 Reputation
04-27-2021 at 08:41 AM #12
Anyone knows if this can jumpstart the car from the lighter port? Wanna have the option for wifey not to have to open the hood and step out of the car in the middle of nowhere

0
Reply
This comment has been rated as unhelpful by Slickdeals users
Joined Jun 2012
Who me?
13,638 Posts
4,526 Reputation
Pro
Expert
04-27-2021 at 09:03 AM #15
IMO, whoever told you that was a legitimate thing is lying. There's no way that the wiring circuit (and fuse) could handle the amps necessary to jump start a vehicle. That being said, if a battery is only slightly down, you could theoretically trickle charge it through the 12v port enough so that the battery would turn the engine over.